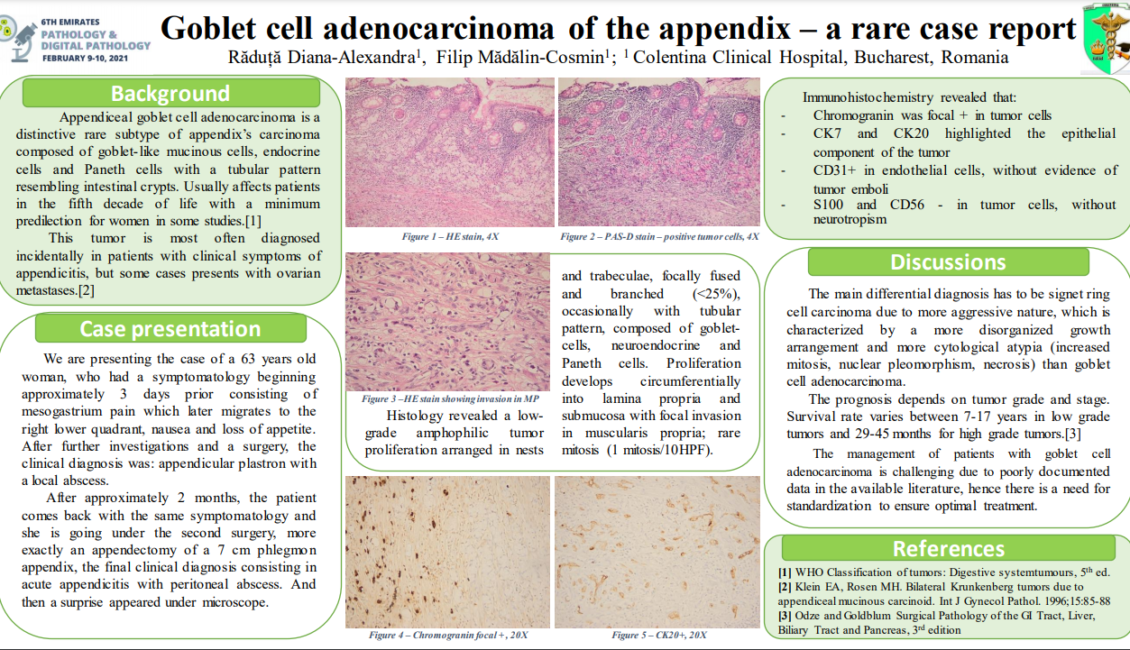 Background: Appendiceal goblet cell adenocarcinoma is a distinctive rare subtype of appendix’s carcinoma composed of goblet-like mucinous cells, endocrine cells and Paneth cells with a tubular pattern resembling intestinal crypts. Usually affects patients in the fifth decade of life with a minimum predilection for women in some studies. [1]

This tumor is most often diagnosed incidentally in patients with clinical symptoms of appendicitis, but some cases present with ovarian metastases. [2]

Case presentation: We are presenting the case of a 63-year-old woman, who had a symptomatology beginning approximately 3 days prior consisting of mesogastrium pain which later migrates to the right lower quadrant, nausea and loss of appetite. After further investigations and a surgery, the clinical diagnosis was appendicular plastron with a local abscess.

After approximately 2 months, the patient comes back with the same symptomatology and she is going under the second surgery, more exactly an appendectomy of a 7 cm phlegmon appendix, the final clinical diagnosis consisting in acute appendicitis with peritoneal abscess. And then a surprise appeared under microscope. Histology revealed a low-grade amphophilic tumor proliferation arranged in nests and trabeculae, focally fused and branched (&lt;25%), occasionally with tubular pattern, composed of goblet-cells, neuroendocrine and Paneth cells. Proliferation develops circumferentially into lamina propria and submucosa with focal invasion in muscularis propria; rare mitosis (1 mitosis/10HPF).

Discussions: The main differential diagnosis has to be signet ring cell carcinoma due to more aggressive nature, which is characterized by a more disorganized growth arrangement and more cytological atypia (increased mitosis, nuclear pleomorphism, necrosis) than goblet cell adenocarcinoma.

I Accept
Add to Calendar